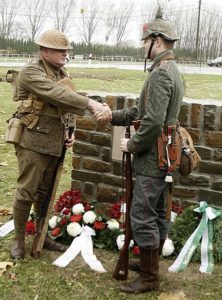 In 1914, World War I combatants observed a Christmas Truce, a break from open hostilities. I’m asking for much, much less here – could we just chill with the left-on-left for a few months? (Photo by Alan Cleaver)

If you read only my first sentence, hear this loudly and clearly – the Colorado primary election is over, and it’s time to unite in efforts to win general elections, even if there’s lingering disappointment from the primary results. But I never write just one sentence. I assume most people reading this will be somewhere on the political spectrum from the center to the farther left, so I will start with a top-10 list of things we desperately need to fight against immediately if not sooner:

* Children being separated from their families at the border, plus racism and race-based violence and discrimination in general (this deserves several bullet points, but it’s a top-10 list so I’m combining)
* Enacting voter suppression laws
* Gutting environmental protection standards
* Stripping health care coverage from millions
* Threats to reproductive rights
* Tax policy benefitting the already wealthy in times of great inequality, while Republicans in the House vote to cut food stamps
* Diverting public money from public schools toward private vouchers
* Schemes like vouchers or block grants for Medicaid and Medicare, or even possible outright funding cuts
* Anti-organized labor legislation and rhetoric
* Shooting our own people in the foot with trade wars, or literally watching people get shot due to inaction on public safety gun legislation

Important stuff, yes? And this is what’s actually at stake in 2018, now that the primaries are over and the field of candidates is set.

People, we can win advances, or protect against setbacks, in some or all of these policy arenas if we simply elect Democrats or beat Republicans, and earn majorities in legislative chambers or win executive positions like the Governor of Colorado. Yes, it is that simple. Democrats actually have a lengthy history of passing progressive bills on these very issues when they have the votes, while Republicans have been running bad bills and supporting the wrong side of these policy matters since long before Trump took office. If you don’t trust me, start hitting congress.gov or leg.colorado.gov and look up as much of the last 50 years of voting history and bill sponsorship as you can handle. It’s public record, and it’s real. 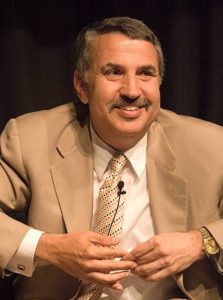 Sure, Thomas Friedman’s too centrist for some, but his scoreboard says “Pulitzer Prize winner” and the Facebook flame thread we’re all arguing on doesn’t…(Photo by Charles Haynes)

New York Times columnist Thomas Friedman makes the case for just voting Dem across the board very nicely in his piece “Sounding Code Red: Electing the Trump Resistance,” in which he says, “It’s a choice between letting Trump retain control of all the key levers of political power for two more years, or not.” And it’s one thing to hear an anti-GOP message from Friedman – now it’s also coming from long-time conservative columnist George Will, with his recent work “Vote against the GOP this November.” Will’s erudite reasoning is worth the read, but if you’ve only got time for one sentence, here you go: “The congressional Republican caucuses must be substantially reduced.” 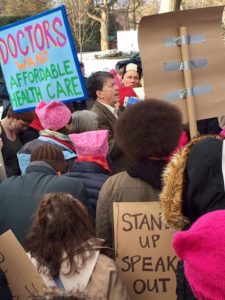 There have been a lot of great protests since Trump’s inauguration, but without electoral victories in 2018, expect more of the same stuff that we’re protesting against! (Photo by Kiki3000)

I’m not some emotionless cyborg, but I get concerned when political discourse neglects the structural importance of majorities and the executive position. Here are some really positive outcomes worth fighting for going into this general election:

* Taking back even one chamber of Congress, whether it’s the House or Senate, will provide at least one check not currently present in our system of checks and balances, thus allowing at least one chamber to block the worst bills. Also, taking back the Senate could block or influence Trump Supreme Court nominations.
* Keeping control of the Colorado Governor’s position will protect against Scott Pruitt-level departmental director appointments and right-wing vetoes of progressive bills. This could be a close race, and a small number of votes might matter since it’s winner-take-all.
* Taking back the Colorado Senate, currently under Republican control by one seat, will allow the General Assembly to pass progressive legislation that has often been killed in Senate committees since 2014 (assuming Dems keep control of the House).

And yes, Dems are imperfect (so is everybody), but that doesn’t make it fair or wise to reduce policy disagreement to one-off pejoratives like “neoliberalism” or “corporatist,” or to base every decision on who is the most “progressive” or “centrist.” This is the “this-ism, that-ism” that accomplishes little beyond tarring and feathering, when folks in the center or left of center don’t have the numerical luxury of thinning ranks or losing elections. So, let’s play a little game.

Contact any number of legislators and ask them if they consider themselves “neoliberals.” I’ll bet in advance that almost nobody answers “yes,” and that if they actually want to respond, they’ll need a definition of what a neoliberal really is. I’ve looked, and no elected official I’ve ever seen calls themselves “neoliberal” in campaign literature or on websites. I’ve known a lot of elected officials, and I’ll guarantee they’re not pondering, “How can I advance the neoliberal agenda?” over their morning coffee.

I’ve found a number of opinion pieces with interesting discussions about neoliberalism. One, from Jonathan Chait of New York Magazine, is called “How ‘Neoliberalism’ Became the Left’s Favorite Insult of Liberals.” In it, he writes of the lack of self-identification I mentioned in the paragraph above, and while it’s a longer story worth reading, concludes “…it is an attempt to win an argument with an epithet.” I hope people will consider this moving forward, yet in the interest of fairness I’ll link to another story titled “Jonathan Chait Is Wrong: Neoliberalism Is Real and Fundamentally Opposed to Left Principles.” I’m coming down on Chait’s side here, because I believe the label obscures the totality of complex and experienced individuals, and exacerbates current negativity surrounding officials whom many would merely consider centrists, people with talents and strong or defensible positions on most issues.

Next, ask the same officials if they consider themselves “progressive,” and I’ll bet in advance if you’re talking to Democrats that most of them will. Chances are good that they can back that up to a given degree with their voting record and/or history of bill sponsorship, or policy stances if they haven’t been elected yet. While you’re at it, don’t trust the elected official on this – as I said before, voting records and bill sponsorship are public records, and anyone can find enough information to make a better-reasoned judgment if they take the time.

Next, let’s consider tactics. If you’re actually interested in results or building political influence, guess what? You need allies, not enemies. Armed with knowledge about a person’s comprehensive history, a person could say “I see you do favor a lot of progressive positions, and thanks for that. But I think we need to talk about your vote on “X”, your stance on “Y”, or some facts/statistics you might not have considered.” It’s more likely to be productive, and less likely to be destructive, than publicly branding someone who’s basically good if incorrect on occasion (we all are), and who might be able to help you get a high percentage of what you want if only by voting for a good bill someone else sponsors. 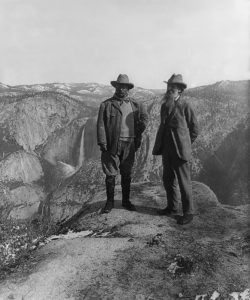 Teddy Roosevelt did great work within the dreaded two-party system, including in public land preservation, then split his former party’s vote by running third-party and losing in 1912. Here he is in Yosemite with John Muir, founder of the Sierra Club.

There have always been differences in the spectrum from left-center to farther left, and that’s natural plus probably healthy if it leads to quality debate. What worries me is when it forces Democrats into a two-front war, facing negativity or general election challenges from the farther left while fighting tough battles against Republicans’ big money and devoted base and entrenched interests. And here’s an example where a progressive split hurt Republicans. Ex-Republican President Teddy Roosevelt ran as a Progressive (aka Bull Moose) in 1912, but his candidacy split the Republican vote and handed Democrat Woodrow Wilson his first term in office.

Splitting the vote of the left or right, even by only a few percentage points, has in reality contributed to the defeat of other candidates who might have otherwise won. Folks will argue with me on this point, and I’ll argue back because I’ve seen it happen. Sure, no candidate is entitled a vote, but voters should also consider the consequences of their actions. The Bush and Trump administrations with GOP-controlled Congresses have been undeniably disastrous when it comes to preventing or killing progressive policies, and both benefitted from the farther left voting against – or nearly as importantly, dampening enthusiasm for – Democratic candidates who had better experience and could have defeated them. It wasn’t the only factor, but it was a factor.

So, back to the title of this piece – I’d like to propose suspending the left front of this two-front war until at least after the 2018 general election, in the interest of a strong and unified campaign against the New Right. Then, the next primary election season, or periods between general elections, are actually good times to test the strength of a given segment of the political spectrum. It gets a bit mean and divisive at times, but that comes with the territory in politics. A strong leader who’s worthy of holding an office will recover from a few battles or even insults, and should grow or learn from having their positions tested.

I’ll also propose a bit of a deal. For centrist Dems, try to understand that you’re setting yourselves up for primary challenges from the left when you a) rely on weak focus-group-tested messaging that excites nobody beyond mercenary consultants, b) fail to understand the difference between compromise and capitulation, c) ignore the best points of today’s progressive movement, and d) neglect the truly struggling while you’re taking their votes for granted. Furthermore, you’ll lose some of these challenges.

For the progressive wing, try to understand that a) intelligent adults can disagree on detail and society’s interests aren’t always best served through a litmus test, b) negativity toward mainstream Dems might backfire hard if it helps get Republicans elected and they earn or keep majorities, c) anyone can make a bold campaign promise but once elected, they have to work within the entire governmental structure, including opponents and a budget, and d) experience and electability are real things (hint – get some), and individuals or organizations naturally care about this since there are heavy consequences to losing majorities or executive positions.

And for everybody – if you believe like so many people that we’re at a critical point in our nation’s history, only strong electoral results in 2018 can in reality help us tackle that top-10 list of essential issues. Let’s not let lesser concerns get in the way right now, and if we need to fire up the left-on-left debates again, let’s wait until the 2018 results are in and everyone who’s working on honorable campaigns can catch their collective breaths, hopefully after celebrating. This is big.