Jared Polis’ Most Important Endorsement: Me 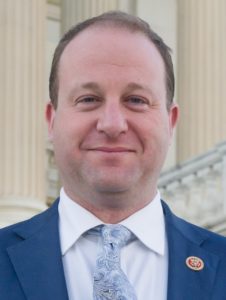 In my opinion, electing Jared Polis the next Governor of Colorado is the most important consideration on the 2018 Colorado ballot. I’ll write briefly about Congressional races in a footnote after the end of this “endorsement,” but the Governor’s race is the only executive-level contest on our ballots. I hope readers with any political leanings at all either understand, or will come to understand, the undeniable importance of executive power.

Remember – political races and the associated personal pettiness end on Election Day, while the structural components of governance last for the length of an official’s term. Also remember – all Governors wield tremendous executive power, along the lines of a U.S. President but on a smaller scale. This includes the authority to nominate Colorado Supreme Court justices (cough, cough, Kavanaugh), veto power, nominations or appointments for cabinet members or high-level departmental directors (nudge, nudge, DeVos and Pruitt), executive orders, and the ability (or lack thereof) to work with folks in other levels of government or other states. This is what’s really at stake right now.

I completely understand that other folks will think other issues on this really heavy ballot are more important than the Governor’s race – maybe transportation, education, fracking, redistricting, or any of the other 2 million things we’re scrambling to understand. Please keep in mind that the Governor could have a hand in most or all of these issues over the course of four or eight years, along with the countless other things the state deals with on a daily basis and the inevitable surprises waiting for us down the road. The Governor’s courses of action could make a difference in other sectors of the economy or environment, higher education, the state pension (PERA) account, energy, agriculture, tourism, human rights, public safety, and on and on. Single-issue focus is OK during a campaign, especially if that’s all a person really has time for, but once the election is over our officials must work on every issue within the boundaries of their job responsibility.

Leaving the structural for a moment – Polis has far broader experience in governing than his opponent. He’s served on the State Board of Education, and education accounts for about 37% of the state’s General Fund plus prepares our youth for productive adult lives. He’s done ten years in Congress, and federal issues do pertain to the State of Colorado. I’ve worked on a congressional campaign plus covered a number of candidates and races as a journalist, and will attest that the volume of issues and information involved in congressional life is staggering. He’s a successful businessman and entrepreneur. He’s supported progressive causes, he’s been involved in supporting other successful Colorado campaigns, and he’s worked within the state’s initiative process.

And while not every local personality likes this, he played a major part in changing the General Assembly from being dependably Republican-dominated to normally Democratic-dominated last decade. I’ve seen the difference between how the two parties operate – it’s more stark and profound than many of us imagine – and deeply appreciate how this change made passing progressive bills in Colorado a possibility.

I know Jared as a person to a certain extent, and feel comfortable saying “Jared is Jared.” He’s got an independent streak and does not always follow Democratic Party or left-wing orthodoxy. But if that’s what’s keeping any readers undecided in this race, please take a few minutes and compare Jared’s policy stances to Walker Stapleton’s – across the board, not just on one issue. If you’re to the left of Mitch McConnell, I will guarantee that you’ll get much, much more from Jared than from Stapleton, and that’s what’s important about the next four years.

And please don’t neglect this point – if Jared doesn’t win, you get Stapleton. There is no other possible outcome.

There are parts of Colorado that are very red, including El Paso County, which now has Colorado’s largest county population, and Republicans turn out for midterms. The current Governor John Hickenlooper only won in 2014 by about 3 percentage points, and was actually behind in the public tally when we all went to bed on Election Night, assuming you were able to sleep. My Election Night 2014 was miserable as I watched a few key close races go the wrong way, thank you very much.

Every vote matters, and while I’ve tried to avoid mentioning Trump, we’ve all seen what happened due to losing the executive position at the federal level. It’s been flat-out ugly, and while I can’t bring myself to compare Stapleton to Trump, they share a significant amount of ideology and you’d see it if he became Governor.

There’s no need to go much further here. The ballots are out, the campaign’s been going on for months, and we’re all sick of the commercials. Please vote for Jared Polis. I approve this message.

Footnote: While I believe the Governor’s race is the most important on my ballot, I believe flipping the U.S. House of Representatives is the most important issue for America. There are some competitive races in Colorado, and electing Jason Crow in Congressional District 6 and/or Diane Mitsch Bush in CD-3 would be great pick-ups in the quest to win back at least one check in our system of checks and balances. I happen to believe Joe Neguse in CD-2, where I live, is running in a district favorable to Democrats and expect him to win, but please don’t mess around here and please vote for him. Ed Perlmutter is a popular long-time incumbent in CD-7 and I also expect him to win, but if you live there he still needs your vote.

And really, I led by saying the Governor’s race was the most important contest on the ballot, but take this with a grain of salt. They’re all important!