Cure: Boulder’s Heritage at the Crossroads 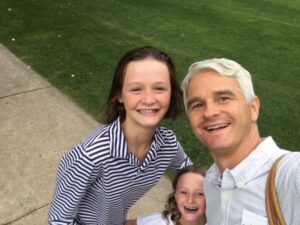 Paul Cure, co-owner and co-founder of Cure Organic Farms in Boulder County, not surprisingly touched on Boulder’s historical heritage often during a City Council candidate interview in the historic Highlands City Club building near 9th Street and Arapahoe Avenue. At a point on Boulder’s timeline in which change and growth are of hot-button political discussion, Cure hopes to play the role of a collaborative facilitator on Council as part of a civic “conglomerate of voices” on the issues of the day.

“I want to see things move forward but I want them to move forward and evolve in a considerate way from where we’ve been,” said Cure about his decision to run.

Cure was born in Grosse Pointe, Michigan, the son of a father who was an economics professor at Macomb Community College and a mother who was a cancer counselor at Detroit Medical Center. He said his midwestern upbringing exposed him to great natural beauty, as well as a lasting impression that there were “haves and have nots” in the world.

Cure began college at the University of Northern Colorado, and eventually earned his Bachelor of Arts degree in cultural studies/critical theory and analysis from the American University in Paris. Living abroad for Cure was an eye-opening experience, as he was exposed to people who spoke different languages and came from different cultures – in fact, his first roommate was from the African nation of Togo, and he did not even know where Togo was before meeting his roommate, let alone understand its culture.

He planned to attend the University of Maastricht in the Netherlands for graduate school, but met his future wife, Anne Cure, and the couple moved toward a career in organic farming. They interned on farms in Seattle before starting Cure Organic Farms, and Cure said the farming life helped him build strong problem-solving skills and an “incredibly hard work ethic as well as a dedication to the task, knowing that sometimes at the end of the day you still have more work to do.”

Today, Cure is the vice president of Historic Boulder, and this experience has led to greater understanding of Boulder’s historic structures and the city’s landmarking process. He also owns Mea Culpa Productions, in which he hosts a topical panel discussion series at Boulder’s Dairy Center for the Arts called “We Need to Talk.” His other experiences in civic engagement have included serving as a CASA advocate (Court Appointed Special Advocates), a committee member with the Conference on World Affairs, and volunteering with the Boulder International Film Festival and Jaipur Literary Festival, among others.

Among Cure’s top ideas for what he’d like to implement should he be elected is allowing shoppers to donate one percent of the value of purchases to their choice of the arts, Open Space, or transportation through what he would call “Boulder Bucks.” According to Cure, this would provide some funding for local needs without a tax increase, and he said the idea is based on Patagonia’s existing “1% for the Planet” program.

Alpine-Balsam-Broadway: Cure would like to see the city enter into a public-private partnership for development of the city-owned portion of Alpine-Balsam. He envisions the city agreeing to a 99-year lease, with about “250-270” housing units and city offices being built on the property. The city had set aside a proposed area plan for the broader area around the city-owned land several weeks before this interview, and Cure believes the city should enter collaborative discussions with other entities to see if housing or facilities that might not be possible in the Alpine Balsam area could be built elsewhere. This could include talks with Boulder County about their property at Iris and Broadway, and discussions with the multiple owners of the Diagonal Plaza retail center, which could be a site for future development or redevelopment.

Boulder Municipal Electric Utility: Cure does not support moving ahead with creating a municipal electric utility, instead supporting “encouraging and pressing” Xcel Energy to move toward an electric portfolio with larger percentages of renewable energy compared to its current mix and longer-term plans. He does not believe Boulder’s “muni” effort is a good use of city funds.

CU-South: Cure originally supported the Variant 2, 500-year floodplain plan for the CU-South property, but city staff literally took Variant 2 off the table on the evening after this interview, in part due to Colorado Department of Transportation concerns over construction in its US 36 right of way. After the interview, Cure sent the following statement: “I have been in dialogue with some of the CU Regents, and I agree that the Variant 2 proposal does need a reassessment and open dialogue with CDOT about how best to implement the changes necessary to fully accommodate the needed structures for a successful and considerate campus.”

During the interview, Cure noted that CU-South is the University of Colorado’s land and they will inevitably come up with proposals for how it should be developed. He said the university has significant affordable housing needs for its professors, and while Council should be credited for taking time to consider the impacts of flood plans and potential development, there should be a timeline for finding a solution that includes adequate flood mitigation, in part to make sure a flood event does not lead to extreme life and safety hazards for residents living downstream from the property.

Social Equity: Cure noted that as a white male, he had a lot to learn about issues of social equity, and plans to do “a lot of listening” if elected. He appreciates the work of Nikhil Mankekar, current chairperson of the city’s Human Relations Commission, in helping the city keep an eye on problems and solutions. Cure believes his “We Need to Talk” series is the kind of event that can foster community dialogue, and said past guests have included Teresa Younger of the Ms. Foundation and Lorena Fuentes Ibanez, who has worked with the Colorado Immigrant Rights Coalition. Regarding recent policing incidents in Boulder that many have seen as racial profiling, Cure said he supports community police oversight efforts, and mentioned that Boulderites can actually enroll in the Community Police Academy to increase their understanding of what local policing responsibilities entail.

Growth, Density, Jobs-Housing Balance: According to Cure, a series of civic decisions created Boulder’s physical parameters that define the city today, including the Blue Line, Open Space, and the building height limit. Given the city’s parameters and physical environment, he said “we can’t accommodate everyone,” and added that drought is always a possibility, so as an organic farmer “you realize rather quickly that we live in the high-mountain desert…and to my knowledge we do not grow water.” He acknowledged the jobs-housing imbalance, as well as an upward skewing of local median income, but said Boulder should not sacrifice its current parameters “just to accommodate the always present demand for more.”

Climate: Again as an organic farmer, Cure has a natural interest in carbon sequestration, in which carbon dioxide (CO2, high atmospheric concentrations contribute to climate change) can be removed from the atmosphere and stored in the soil. He said Cure Organic Farms practices “carbon farming” through the use of cover crops that take CO2 from the atmosphere and move it into the soil, and added that carbon farming can also positively impact soil quality. He said Boulder should also use its vast Open Space holdings in strategies to remove carbon from the atmosphere. As noted above, Cure believes the city should encourage Xcel to boost its renewable portfolio, and said the city should expand its “Net Zero” building portfolio in Boulder.

Open Space Ballot Measure, Ballot Issue 2H: Yes, but Cure would have preferred having Boulder Bucks as part of the measure.

Endorsements: Cure received an endorsement from the Daily Camera.

Key Donations: As of Oct. 15, Cure had self-funded slightly less than half of his campaign.