Duran: The Long Road To Her First Run For Council 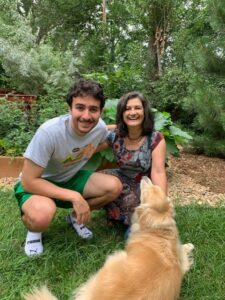 It would be a serious understatement to say Benita Duran, a 2019 candidate for Boulder City Council, came to her candidate interview with stories to tell. While she is making her first run for elected office, she has a lengthy resume of experience in the political world, city staffing, civic engagement, consulting, and the private sector, and said her decades of experience helped her make the decision to finally throw her own hat in the ring.

“I offer a perspective I think we need on the council, which is a collaborative voice and spirit that knows how to engage and listen and bring diverse views to the table, and one who has a sense of economic health and vitality for our community,” said Duran of her decision to run for Council.

Duran was born and raised in Pueblo, Colorado, and earned an undergraduate degree in economics from the University of Denver. In her senior year at DU, a professor encouraged her to interview mayoral candidates in Denver for a paper, which was where she met former Mayor of Denver Federico Pena, and she wound up working as a volunteer coordinator on his campaign and on Pena’s transition team after he was elected. She worked for the Mayor for eight years and handled a wide variety of responsibilities, and during that time earned a master’s in public administration from the University of Colorado.

Knowing of Duran’s interest in city government, a friend encouraged her to apply for a project administrator’s job in Boulder, and she was hired. Her projects to follow included work to help launch the Dairy Center for the Arts, and to set up what was once the Community Access TV (CATV) public access TV studio in the Dairy. She also worked on annexations in north Boulder during the time of the North Boulder Subcommunity Plan process.

Duran eventually left the city, and the private sector engineering firm C2HM Hill hired her as a government affairs director for five states. She stayed with C2HM Hill until 2008, when she landed a position with Denver Public Schools in which she tackled projects including establishing their office of community engagement, along with issues of transportation, safety, and environmental principles. After a period of working for DPS, she decided she wanted to be closer to home, and started her own business focusing on community development. Her most current responsibility is as project manager for the Latino Cultural Arts Center, which is slated for near-term development on land adjacent to Mile High Stadium (sorry, it’s technically Empower Field now).

This is a very brief and condensed version of Duran’s history, but it’s the fall of 2019, and it’s time to talk about the issues!

Alpine-Balsam Broadway: Duran is a board member of Boulder Community Health, and was on the board when it decided to put the Alpine-Balsam parcel up for sale. She said she is pleased that the City of Boulder purchased the parcel, and could have had regrets if certain other interests would have wound up owning and controlling the property. Duran helped organize meetings to envision the site’s future, with participants including community members, development professionals, the Community Foundation serving Boulder County, Urban Land Institute, and people who had worked on the St. joseph’s project in Denver. She said the focus of Alpine-Balsam redevelopment has shifted from city offices to a more housing-intensive agenda, and she supports density along the Broadway-facing side which can help people better take advantage of transit opportunities along the corridor. Other 2019 candidates will say the Alpine-Balsam project has suffered from inadequate public engagement, or the type of public engagement, but Duran says there has been quite a bit of engagement and believes that the city just needs to “keep moving forward.”

Growth, Density, Jobs-Housing Balance: Like most candidates, Duran did not try to offer specifics about how big the city should get in the near-term. However, she recalled being asked on the campaign trail to envision a Boulder at 200,000 people, and said she didn’t believe the city’s design or infrastructure would handle that level of population. On the other hand, she said she’s noticed the difference in the city during the time it grew from about 94,000 to today’s population of roughly 108,000. Duran said she’s interested in seeing better data to show what the commonly expressed claim that there are 60,000 in-commuters coming into Boulder really means – to see if it’s people commuting to work, coming for school, or visiting for other reasons. She expressed support for several affordable housing strategies, including creating ADUs (accessory dwelling units), and the city’s “cash-in-lieu” program that allows developers to pay into an affordable housing fund instead of building affordable housing on-site.

She is also a board member of the Colorado Economic Development Commission, and believes this experience could serve her well as the city grapples with the relatively new Opportunity Zone investment program. Her ideas include potentially establishing an Opportunity Zone program for Boulder that might allow only investors from Boulder, or placing limits on return on investment.

Climate: Duran began this segment by praising the city for already doing quite a bit in the battle to prevent serious climate consequences, and for often being on the leading edge. She noted that it seems unlikely that Boulder will get the Northwest Rail commuter line promoted to voters in the 2004 FasTracks election, at least in a timely manner, so areas that aren’t getting the rail including Boulder should consider how they can get reimbursed for the unfulfilled service, and should then re-invest into other types of transportation projects. She is interested in looking into a possible countywide transportation district. The city was working on a Transportation Master Plan update at the time of this interview, and Duran supports making sure city transportation planning includes objectives of reducing carbon emissions.

Boulder Municipal Electric Utility: Duran supports moving forward in pursuit of the “muni,” and putting the issue on a future ballot for city voters to decide. She said independence from Xcel Energy could allow Boulder to redefine its electricity distribution system, including the potential for more “neighborhood-centric” systems within the city. She acknowledged that the muni effort to date has been expensive, including legal expenses, but believes Xcel does not want Boulder’s municipalization to be achievable for “a whole set of market and monopoly reasons.” According to Duran, other cities are watching Boulder to see what the city can accomplish, including Pueblo which has its own issues with Black Hills Energy. Duran said Boulder’s muni effort will need a significant educational effort, in part because not all citizens have a deep understanding of the details, the components of an electrical utility system, and how they all work together. She has confidence that the city can manage a utility, pointing out that the city would hire a utility workforce, and says the muni effort could make positive contributions to climate goals, green jobs, and city sustainability.

Social Equity: Duran is one of two Latinas in the 2019 race. She said she has a goal of moving Boulder toward actually being the “welcoming and inclusive city” that would match stated city values. Part of her focus moving forward would be to promote infusing inclusivity into the city’s hiring and contracting processes. She worked as an assistant city manager for the city, but offered the following statement about her experience: “I had a very fruitful career in the City of Boulder, and it’s helped to broaden my perspective and views, but it was then and still is the least diverse organization I’ve ever worked in.” But the 2019 candidate lineup includes two black women along with the two Latinas, and Duran finds it encouraging for the future that this contest features among the most diverse set of candidates the city has ever seen.

CU-South: Duran said during a candidate forum several weeks before this interview that she supported the Variant 2 plan for CU-South, but city staff pulled Variant 2 from consideration on the evening before this interview due to CDOT concerns over construction in its US 36 right of way. With this change in mind, Duran said she is still in alignment with the work of the South Boulder Creek Action Group, and supports flood mitigation action as soon as possible to address life and safety issues should there be another extreme flood event. She mentioned that the city could still try to obtain a larger part of the CU-South property for Open Space than might currently be on the table, which could help with flood mitigation, and local philanthropy might be one way to help the city purchase additional land without impact to taxpayers.

Right Decision at Hogan-Pancost: “Yes, but…” Duran supports the overall decision, but was not pleased with what she called the “lack of transparency” in the process to acquire the land.

More City Resources for Homelessness: Perhaps, over time. This question was directly about spending or devoting resources. Duran mentioned that there has been a significant amount of recent local action on homeless issues, and she favors near-term evaluation of current efforts to see if more resources are needed.