McIntyre: Back in the Ring to Take Another Swing 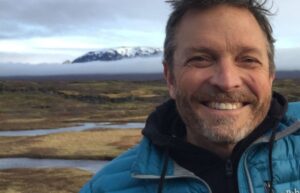 Mark McIntyre, a candidate for Boulder City Council in 2019, is making his second run for office after finishing eighth in a race for five open seats in 2017. But this time, McIntyre has extra time to focus on campaigning and two additional years of city-related experience under his belt, so he’s naturally hoping to earn a seat on Council in 2019.

“It feels like a good point in my life to serve. Also, you look at world politics, you look at our national politics, and you see that the place to really make a difference in people’s lives is here on the local level, and I want to provide some leadership,” said McIntyre.

He moved to Boulder in 1977 as a self-described “17-year-old rock climber,” because he was enamored with the Open Space and Mountain Parks, the climbing culture, and the cycling culture. He worked for a stretch during his youth in Kemmerer, Wyoming, as a roughneck in the oil fields to earn what he called “big money” at the time—about $10 per hour. He also enrolled at the University of Colorado and earned a Bachelor of Fine Arts degree, remaining a supporter of the arts to this day, and served for five years as a member of the curating committee of the Dairy Center for the Arts.

McIntyre spent more than 30 years as an owner and partner at Marketing Technologies, which in short provides contracted technical sales for U.S. parts manufacturers, including parts such as castings, stampings, and injection-molded plastic parts. However, he and his partner recently sold the business to employees of the company, so he said he is now “officially retired.”

When it comes to city-related civic experience, he served a two-year stint on the West Trail Study Area process that worked on use and management issues regarding the city’s western Open Space holdings. He has also served on the board of the Boulder Mountain Bike Alliance, on the steering committee of Open Boulder, and as a member of Better Boulder.

After the 2017 election, McIntyre was appointed to a term on the city’s Transportation Advisory Board (TAB). He said this was appropriate since he considers himself a “transportation geek.” His time at TAB has included working on the city’s 2019 Transportation Master Plan update, and McIntyre said he suggested making sure that the plan’s stated goals were “simple, clear, and repeatable” as opposed to “buried in bureaucracy.” Also, he said he and TAB members encouraged city staff to delay slightly and redesign a current North Broadway Reconstruction plan for Broadway between Lee Hill Road and Violet Avenue, so the segment could be better and safer for pedestrians and cyclists.

Also after the 2017 election, McIntyre was chosen as a member of the city’s Campaign Finance Working Group. As a result of the group’s work, an ordinance was passed to limit allowable donations to candidate committees only to “natural persons,” as opposed to entities such as limited liability corporations. Also, the city now considers “express advocacy” and “electioneering communications” as similar activities, which was controversial during the 2017 election since in certain cases practices like putting a check mark by a candidate’s name on a flyer wasn’t considered electioneering. In addition, the committee’s work led to several city election-related initiatives being placed on the 2018 ballot and passing, including ballot measures on initiative petition requirements, electronic petitioning, and amending initiated ordinances.

Alpine-Balsam-Broadway: McIntyre favors moving forward “relatively quickly” with a project that would focus predominately on housing along with some mixed-use amenities. As of mid-September, he was leaning against current ideas that might move some Boulder County offices to Alpine-Balsam, in part because county involvement would add a “gigantic moving piece” to the process. He believes the project could become a community asset that will be aesthetically appealing. He also said opponents to the project have disseminated unappealing renderings of possible development that could mislead people into opposing a project that won’t really look like the renderings. Without specifying numbers, McIntyre said he would support housing density for Alpine-Broadway in the “mid-to-upper ranges” of recent city staff proposals.

Growth, Density, Jobs-Housing Balance: Without mentioning numbers, McIntyre said the city’s housing future needs to include more housing flexibility, infill, accessory dwelling units (ADU) within neighborhoods, duplexes, opportunities for people to live near where they work, “15-minute walkable neighborhoods,” and opportunities for people to live near transit facilities. He said “evolution” of the community could contribute to greater social and socioeconomic diversity. McIntyre noted that there can be impacts that come with growth, such as traffic congestion, but suggested that the city could deal with these impacts through strategies like better transit or cycling/e-cycling opportunities. He has also found it interesting that the current charter for TAB prohibits the board from formally weighing in on land use issues, but believes land use should be part of holistic considerations of several city goals.

Climate: McIntyre, the TAB member, noted that transportation accounts for a significant amount of greenhouse gas emissions. As mentioned above, he favors working on land use issues that could help reduce the use of single-occupancy vehicles in town. He also favors expanding solar generation, and mentioned a current project called Jack’s Solar Garden, planned for land east of city limits. As the name suggests, the project would include solar panels, but also would incorporate crops beneath the solar panels, which could also reduce the amount of water needed for irrigation. McIntyre said the project is a collaboration including efforts from Boulder County, Xcel, NREL, CSU and Arizona State University, and is a good example of how people can work with Xcel for renewable energy results.

Boulder Municipal Electric Utility: McIntyre said he opposes the “muni” with one caveat – the issue could go before voters in a near-term future election once financial numbers and other details are clear, and he supports putting the muni on the ballot. He said he supported the muni until 2017, but came to believe that pursuing the muni was taking time and resources away from efforts to reduce greenhouse gas emissions, which he says is of higher priority to him than the muni effort. According to McIntyre, “I think that if as a community we say we want greenhouse gas reduction then we need to address that directly, and take steps to get us on a path of actually owning production of carbon free energy and participating in in in real reduction of greenhouse gases.”

Social Equity: McIntyre was quick to say he is an retired white male, the product of white privilege, and knows he’s got a lot of listening and learning to do from people and communities of color. He believes he is able to contribute to issues of economic inequality, including by reforming current ways programs are funded that could be considered regressive in nature (often defined as costing people of limited means greater percentages of their income). For example, he participated in a city transportation funding working group, and proposed the idea of a progressive vehicle valuation fee in which owners of more expensive vehicles would pay more toward transportation needs. He is also interested in lobbying the Colorado state legislature about laws or Constitutional provisions that currently prohibit certain progressive local funding possibilities.

CU-South: City staff pulled the “Variant 2” option from consideration shortly before this interview, and McIntyre said this was surprising to him. To a certain extent, there has been a long-standing impasse between the city and CU since CU needs a water supply for development and the city could provide that after annexation, but the city has not annexed in part over CU’s disagreement with the city over the city’s land use objectives. McIntyre said he has spent time on the CU campus, and noted that CU “has a power plant on campus, they have wastewater treatment, they do a lot on campus, and it is not beyond their capabilities to build a community water system for CU South.” So, he is not confident that the city’s bargaining chip of city water is a strong one in the long run, and supports continuing with negotiations for a timely solution. Like most candidates, McIntyre said he regards the health and safety of downstream residents in case of a serious flood event as the top priority.

Right Decision at Hogan-Pancost: No

More City Resources for Homelessness: Yes, some: McIntyre supports the city’s current coordinated entry program, but is not looking to dramatically expand spending.