So, Where Do We Go From Here? 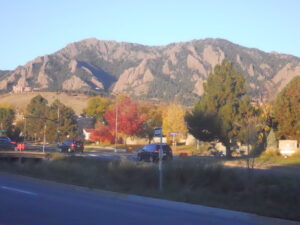 Boulder’s still a beautiful city, and the next City Council will determine some of its future!

Politically involved people often say “this” election is the most important election ever, and while that’s rarely actually true, each election can bring an electorate into a new political reality. In that sense, the 2019 Boulder City Council election could be vitally important, depending of course on one’s point of view.

With political significance in mind, Richard Valenty, former city beat writer and elections editor for the Colorado Daily (that’s me), set out to interview all 15 candidates running for six open seats in the 2019 election. All interviews except one happened between Sept. 10 and Sept. 20. In most cases, the interviews lasted between roughly 30 and 45 minutes. For the most part, candidates were given open-ended questions, so they could speak at length and prioritize what they felt to be their most important points about very broad topical issues.

All candidates were asked questions about the following broad topics. I selected them because I believed they might be of specific interest to some, and hopefully of general interest to many voters.

1) Alpine-Balsam-Broadway: The future of this parcel has been an issue of great recent community interest on a number of levels, including the number of potential housing units and/or housing density, how potential plans could impact neighborhood character, how plans could help the city meet existing goals, and whether there should be city and/or county offices on part of the parcel. Candidates were asked to focus on the city-owned parcel, since the city had pulled a broader area plan from consideration shortly before I started doing interviews.

2) CU-South: This has been a contentious issue since at least the mid-1990s when CU purchased the property. In 2019, it’s been in the news often as a number of entities, not just the city and CU, have interest in the future of this property. Literally after the first interview but before the second, one proposed plan (“Variant 2”) was pulled from city consideration due to CDOT concerns over development in its US 36 right of way. Considerations include what types of development CU might envision, flood mitigation to minimize or eliminate health and safety threats to residents in the South Boulder Creek floodplain, impacts on Open Space property, and how to prevent flood events from closing or damaging US 36. 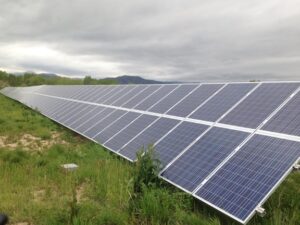 Can the City of Boulder get to 100% renewable electricity?

3) Boulder Municipal Electric Utility: The “muni” may have been more contentious in 2017 than in 2019, since it was on the 2017 ballot. Still, it’s an important local issue today in part because “muni or no muni” can ultimately influence taxpayer and ratepayer spending, Boulder’s carbon footprint and renewable electricity goals, system reliability, local control, and whether local large businesses prefer sticking with Xcel or moving to the muni. The issue could also come before voters again in a near-term future election.

4) Climate Crisis: Both the city and county have recently adopted resolutions supporting efforts to address our current climate crisis. However, it will take tangible action to make actual differences. Candidates were asked what actions they would support to reduce the city’s greenhouse gas emissions – and GHGs are known to influence our climate – with an eye on actions that the city government they hope to lead might be tangibly able to implement.

5) Social Equity: This question was meant to be extremely open-ended, as Boulder could be seen as having social equity issues on a number of levels, including but not limited to issues of race, sex, sexual preference, and socioeconomic status. Candidates were asked to opine on whether Boulder has problems, and to offer a few ways in which the city government could make tangible improvements. 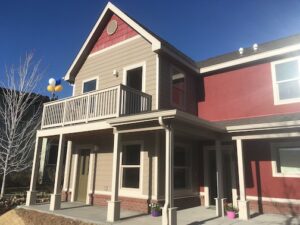 A shiny new home for transitional housing – how many more homes can or should be built here?

6) Growth, Density, and Jobs/Housing Balance: Again, this was meant to be extremely open-ended. Candidates were asked to give opinions about what levels of near-term growth they’d support, housing density, and how (or if) the city should address its jobs-housing balance. Issues of growth and jobs-housing balance have certainly been with Boulder for decades, while density is a bit newer of a top-flight issue, but current residents and those who hope to move to Boulder have interest in how our next Council would hope to address these issues.

All candidates were also asked a series of questions that could have generated “yes/no” answers, but many candidates chose to offer extra explanations for some of the questions.

1) Open Space Ballot Measure: Candidates were asked if they support Boulder’s Ballot Issue 2H, the 2019 ballot measure that includes a 0.15 percent sales tax to fund Open Space Mountain Parks (OSMP) needs and the purchase of a conservation easement for Long’s Garden in north Boulder. The city had just adopted an OSMP Master Plan this summer, so I did not choose to ask broader questions about the future of Open Space this year.

2) Middle-Income Housing Ballot Measure: Candidates were asked if they support the Boulder’s 2019 Ballot Issue 2I, which would establish a fund to enable loans to support purchases of deed-restricted homes for middle-income earners in Boulder.

3) Hogan-Pancost Purchase: Candidates were asked if the city did the right thing by purchasing the Hogan-Pancost property, in essence removing this parcel that has been the subject of controversy for decades from the likelihood of significant development.

4) Protected Bike Lanes: Candidates were asked if they support the city constructing more protected or separated bike lanes. The summer of 2019 has included reports of a number of serious injuries and in certain cases fatalities for cyclists who were hit by drivers in Boulder and along the Front Range, hence there has increased local interest in safety for cyclists.

5) Support for People Experiencing Homelessness: Candidates were asked directly if they would support devoting additional city money or other resources to help people experiencing homelessness. This was perhaps the most difficult question for a “yes-no” answer, and candidates often expounded on this one.

Candidates were also asked about their personal history, as it could be interesting for voters to learn where candidates grew up, went to college, worked as professionals, and performed public service in civic organizations or as volunteers.

In total, this type of profile should offer voters a nice cross-section of who the candidates are and what they stand for. But even though the profiles are a bit lengthy, they still can’t cover everything. Voters are encouraged to seek information from other sources if I didn’t cover any given issue. These sources include the candidates themselves, and I’ve included website URLs so readers can look for issue stances, blog posts, and candidate contact information.