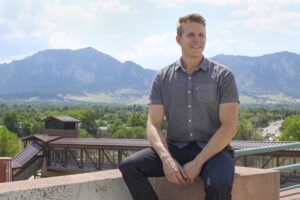 Adam Swetlik, a candidate for Boulder City Council in 2019, is making his second run for office after having finished 13th in a race for five seats in 2017. Swetlik was virtually unknown in the local political scene in 2017, but he immersed himself in Boulder’s civic structure after the election, and said he’s running again for many of the same reasons as his first campaign.

“I saw the housing affordability issue, and I’ve lived the housing affordability issue here in Boulder, and it’s really important to me that we address that a lot more strongly as City Council…I should say that I think Boulder’s one of the best places in the world to live, and I want it to continue to remain that way, and I think overdevelopment especially just for the purposes of making more money is going to ruin a lot of what we have here,” said Swetlik on his decision to run in 2019.

Swetlik is from Green Bay, Wisconsin, and lived there for the first 18 years of his life. He said Green Bay offered some of the same small-town environment as Boulder, and perhaps surprisingly for a city with a National Football League team, the population of Green Bay was just 104,057 in the 2010 census.

He came to Colorado to attend the University of Colorado Leeds School of Business, and graduated with a Bachelor of Science degree in Marketing. While at CU, he became a rower with Colorado Crew, one of the largest club sports teams at CU. He became a team captain and then a coach, but the Crew head coach left about a half-year into Swetlik’s first year of coaching—so he took over as the men’s head coach and stayed in that position for four years.

Swetlik has used his marketing degree in the private sector, including a position as Product Marketing Manager for SparkFun Electronics, an online company that sells electronic components and posts online tutorials for people interested in learning more about electronics. Today, his primary gig is with the Boulder-based business Bjorn’s Colorado Honey, in which Swetlik performs a wide variety of tasks including marketing, sales, office work such as payroll and taxes, and just recently cutting honeycomb. In Swetlik’s words, “it’s small business, you have to do anything you can to contribute.”

After running in 2017, Swetlik was appointed to a one-year term on the city’s Housing Advisory Board (HAB), Boulder’s newest board. He was then reappointed unanimously to a second term, and is the current chairperson. According to Swetlik, one of the biggest challenges was creating an effective board since HAB was brand new, with changing membership, and some learning curve regarding the board’s best scope and mission. He believes one of HAB’s biggest accomplishments has been increased focus on community engagement. For example, HAB put together a “listening session” about the permanently affordable housing experience in Boulder, with outreach including publicity in local media. HAB sought input from people who live in affordable housing and who develop affordable housing, in what Swetlik called a “proactive” strategy to better understand this and other complex issues.

Also after the 2017 election, Swetlik served as a board member of the citizen group PLAN-Boulder County, though he is no longer on this board.

Alpine-Balsam Broadway: As a HAB member, Swetlik said he had to refrain from detailed comment on Alpine-Balsam for the sake of this mid-September interview. However, he did say he believes it would have been better to have more inclusive neighborhood engagement earlier in the process, and noted that one of the symptoms included people creating their own surveys about the site in part because they didn’t feel heard by city staff. “If they don’t have to feel like something’s happening to them, instead of being a partner in it, then it’s just going to be a whole lot easier process throughout,” said Swetlik.

Growth, Density, Jobs-Housing Balance: Swetlik has basically only lived in two cities of similar size, Green Bay and Boulder, and does not want major near-term growth in Boulder. He believes living in a mid-sized city has provided him, a self-described “regular person,” with attainable opportunities to, for example, chair a city board and run for council. He does not believe Boulder will be able to solve its housing affordability crisis through more building alone, especially if a high level of new construction is not affordable – “and I don’t blame developers for wanting to build that, it’s where the money is.” He touched on a broader issue, that in many instances a property may be to a certain extent part of an investment portfolio and not just a home, and said while Boulder has its own characteristics this is a national issue in desirable communities. According to Swetlik, if the predominance of new high-priced or luxury housing units in Boulder continues, “we’re going to lose an entire generation of people” who can’t afford housing in town.

Climate: Sticking with the housing theme of this interview, Swetlik said his climate goals would include continuing to push for the best green building practices possible. Also, he favors increasing standards for reusing or recycling solid material from demolition or renovation projects, and retrofitting properties as opposed to demolishing them if possible. “I’m one of those people who thinks the best building, the building’s that’s most carbon free, is the one that’s already built,” said Swetlik. Like several candidates, Swetlik said the city needs better mass transit to help people get around car-free, and strongly criticized RTD for the lack of Northwest Rail service into town despite the region’s tax contributions since FasTracks passed in 2004. He said he met with Longmont Mayor Brian Bagley, who has suggested suing RTD over Northwest Rail, and Swetlik said he would be willing to consider joining in on legal action if necessary.

Boulder Municipal Electric Utility: Swetlik says he supports the “muni,” but only partially for environmental reasons. He also regards the muni effort as part of a larger stand against corporate greed, which could be seen as a major issue on multiple fronts across America. Boulder’s current electric provider Xcel Energy is an investor-owned utility, and Xcel’s financial performance and profit margins factor into return on investment. Swetlik said part of the muni effort has included pushing Xcel toward more extensive renewable energy portfolios. He also said the muni will help Boulder reach its environmental goals faster than relying on a patchwork of isolated smaller actions, and believes the muni’s impact on climate change will make the effort worth the cost.

Social Equity: Swetlik said he believes Boulder works harder on issues of social equity than many other communities, but needs to keep working. He used to work as a bouncer at the Walrus Saloon before it closed, and said the experience opened his eyes to the existence of racial conflict in Boulder. He supports moving forward with Boulder’s community police oversight efforts, and said he spoke before Council after a black man was surrounded by police in 2019 despite being peacefully on his own property. He also said some level of racial inequality stems from economic inequality in areas including housing, and said if future housing development is geared towards upper income levels, then “we’re going to keep getting further and further away from our diversity goals.”

CU-South: Like many candidates, Swetlik regards health and safety of residents living downstream from the CU-South property as of the highest concern. He also now lives in a property that was hit in the 2013 flood, and believes that it would be hit again should another flood event like 2013 occurs. Unlike some candidates, he sees CU’s role in negotiations as a major sticking point in the length of time it’s taking to complete an annexation agreement and begin work on flood mitigation. According to Swetlik, CU is “acting very much like a developer,” which to him seems contrary to CU’s reputation as an environmental institution, and he believes CU is attempting to reserve as much of the property as possible for development that will include more asphalt and concrete, which of course does not absorb water. He said CU is the land owner and can develop as it wishes post-annexation, but would prefer a plan in which more of the land would be used to mitigate flood impacts and to protect sensitive lands in the floodplain. According to Swetlik, the city and CU need to partner collaboratively on crafting an environmentally sensitive solution in a timely manner.

Right Decision at Hogan-Pancost: Maybe – Swetlik thinks the property could have provided space for a tiny home pilot project.