Yates: Though Process May Get Tense, What Makes Sense? 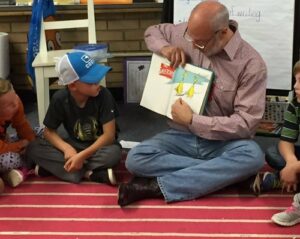 Bob Yates, an incumbent Boulder City Council member, is running for re-election in 2019. He earned a four-year term in 2015 – despite being a first-time candidate, he was the top vote-getter in the race for five open seats – and said he hopes voters will recognize his experience and efforts and decide to return him to office this November.

“I understand the process, I get along with my council colleagues, I get along well with staff, I understand where to go for information and who to trust.  I feel the community’s made an investment in me, and I would like an opportunity to repay that investment,” said Yates on his decision to run for re-election.

Yates was born in Omaha, Nebraska, and his ancestors had lived in Nebraska for multiple generations. His father was a book salesman so the family moved around, and Yates spent some time living in southern California and near New York City growing up. He said he gained influences from all three locations, including the “midwestern nice” values that he believes exist in Boulder.

He enrolled in college at the University of Scranton in Pennsylvania, noting that his family has a long tradition of attending Jesuit schools, and that Jesuits teach service to others as a core value. He earned degrees in business and science, but realized he “wasn’t going to be a PhD scientist,” and decided to attend law school post-Scranton. He and his wife were interested in living in San Francisco, so Yates enrolled at the University of California Hastings School of Law, earned his law degree, and the family returned to Omaha.

Yates started practicing law at a firm with about 20 lawyers, and advocated for clients in a wide variety of businesses – real estate, meatpacking, health care, and cola among them. This led to work with a telecommunications company that eventually became Level 3 Communications, who asked him to work for them. Despite being a partner in a law firm, he decided to accept the offer, and he became the company’s general counsel for European operations. The family moved to London, but his oldest son was getting ready to graduate from high school and the family wanted graduation to be in the United States. While Yates was in Europe, the company moved its headquarters from Omaha to Broomfield, and Yates came to Boulder to live in 2001.

As with several of the candidates who have extensive resumes, this account is extremely abbreviated. Yates has also served with local civic organizations including the Museum of Boulder, Colorado Chautauqua Association, Dairy Center for the Arts, and the city’s Parks and Recreation Advisory Board, among others. Also, readers may be interested in his monthly “Boulder Bulletin” newsletters, in which he discusses city issues and his reasoning behind decisions, with archives going back to October 2016, and he said it leads to two-way communications between the Council member and constituents who might agree or disagree with his positions.

Alpine-Balsam-Broadway: As of mid-September, the city had abandoned a broader area plan for Alpine-Balsam and was focusing on the city-owned parcel west of Broadway. Yates said he believes this “decoupling” was a good thing, but also said he’s in the minority of Council in wanting to slow the current process down. Like several candidates, he said despite good city staff efforts the neighborhood engagement process was not optimal for all, and slowing the process might allow for more complete neighborhood input. Tangibly, he didn’t offer a firm number of housing units he’d like to see on site, but said he believes having permanently affordable units would require some level of market-rate housing units for economic reasons. He said he is “not opposed” to having city offices at Alpine-Balsam, but is “not yet convinced it makes economic sense.” Also, Boulder County could be interested in office space at Alpine-Balsam, so Yates said he suggested having elected officials from the city and county meet with staffers in a working group to flush out the options.

Growth, Density, Jobs-Housing Balance: According to Yates, the city has added about “100-200” housing units per year recently, depending on the year, and he said he believes that is a good pace. When it comes to the jobs side of the jobs-housing balance, he said it’s a bit difficult to manage job growth and it probably wouldn’t be legal to pass an ordinance limiting new companies or jobs. However, he said the city might be able to examine zoning and/or use tables in ways that could help guide future jobs-housing balance. Yates said the city has neither approved nor declined approval for major commercial development during the time he’s been on Council. He said new housing density might make sense in certain locations, and probably not in others, depending on factors including whether it fits neighborhood character or if existing infrastructure would support the new housing.

Climate: Whether Yates is a fan of the muni or not, it’s not a given that city voters will give a go-ahead in a future election, so it will be important to have other climate strategies in place whether the muni succeeds or fails. He said he attended a July study session with city staff at which they discussed other approaches. Yates said he could be interested in working on a Boulder pilot program for natural gas conversions in existing buildings. He also praised Boulder’s composting efforts, in which organic waste is kept out of landfills where the waste can break down and generate methane emissions, and the compost can be used as a soil amendment that contributes to carbon sequestration.

Boulder Municipal Electric Utility: Yates has been openly critical of the city’s “muni” effort, and he said this goes back to at least 2010 or 2011. In short, he said he’s not happy that the city has spent roughly $22 million and spent years on the effort, without anything tangible to show for it. He added he doesn’t believe Boulder’s muni path would be replicable elsewhere in a manner that would make major impacts in the broader fight against climate change, though he said he does believe Boulder could get to 100% renewable energy. He said he’s hopeful for the future because the Colorado General Assembly passed and Governor Jared Polis signed a number of strong energy and climate bills in 2019, and Xcel Energy has stepped up its renewable goals and acquisitions that can have impacts on greenhouse gas emissions.

Social Equity: Regarding recent police incidents in Boulder involving black men that could have been considered racial profiling, Yates said he supports moving forward with community police oversight efforts. A future police oversight board would, in short, examine and investigate complaints, and examine policing practices and policies. Yates said policing is a tough job that he wouldn’t want, but it’s important for citizens to have confidence in the police. Yates’ oldest son is gay, so Yates has an interest in LGBTQ issues. He was walking around San Francisco and noticed a large number of rainbow flags, and felt it would be a good idea to bring the rainbows to Boulder if only as a symbol of acceptance. He took a leadership role in a “Rainbows Over Pearl” project in which more than 180 businesses along Pearl Street accepted free rainbow flags, and crosswalks were painted in rainbow colors. Yates also said it’s important to make sure people have welcoming values and acceptance of differences at an early age, so he reads to elementary school students several times per month as part of a “Reading to End Racism” program at Boulder Valley School District Schools.

CU-South: Like most candidates, Yates said the top priority for CU-South has to be health and safety of residents living downstream from the property in case of a serious flood event. In candidate forums and on his newsletter, Yates has described the current situation as like a Venn diagram, in which the interests of entities including the city, CU, CDOT, Open Space, and nearby neighbors intersect or differ by varying degrees. Yates was one of three Council members to vote against the Variant 1 proposal for flood mitigation earlier this year that the majority of council supported, but CU opposed. However, city staff recently pulled the Variant 2 proposal from consideration, and in mid-September Yates said the council should take a “mediator’s role” including collaboration with the various players in hopefully crafting a solution that might require all sides to give a bit. He said he feels confident that a solution will arise, even though it may seem ‘frustratingly slow” for downstream residents, and anticipates receiving updated information from city staff about possible next steps by the end of the year.

Right Decision at Hogan-Pancost: Yes, but was not happy with the process

More City Resources for Homelessness: Yes, he would be willing to devote more resources but doesn’t yet know if this is necessary. He believes the city has improved from about a 3 on a scale of 1-10 with 10 representing great services, to about a 5 over the past four years.