City of Boulder Ballot Issues 2H, 2I, and 2G

The following City of Boulder ballot issues may look pretty straightforward at first glance, and I’ve tried to keep this simple. However, there are a fair number of details voters may wish to consider in addition to what I’ve written, so I’ve included links to other sources of information for those with heightened levels of curiosity. 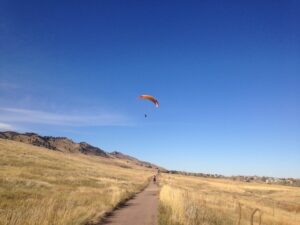 Love it or loathe it, Open Space is a big part of Boulder and how residents or visitors spend their time here!

Issue 2H would, in short, fund Boulder Open Space and Mountain Parks (OSMP) needs, and fund the purchase of a conservation easement for Long’s Garden in north Boulder.

2H would extend an existing 0.15% City of Boulder sales tax, currently set to expire Dec. 31, 2019, for 20 years until Dec. 31, 2039. The 0.15% tax was designated for transportation purposes, but would instead be dedicated to OSMP and the Long’s easement should 2H pass. The first year’s revenue would be dedicated to purchasing the easement for Long’s, while the OSMP revenue for the following 19 years could be used for maintenance of existing holdings, land acquisition, and/or preservation or restoration projects.

According to a summer 2019 city staff memo, the 2H tax would generate about $5.3 million per year, and Council intended $5.3 million to be the maximum purchase price for the Long’s easement.

Today, OSMP manages about 46,000 acres of land, and acquiring more land is not as large a priority as it was in the past, in part because many desired parcels have already been obtained. However, the system gets a lot of use from Boulder residents and visitors that include residents of a growing Front Range – about 6.25 million visitors in 2017, according to the newly released 2019 OSMP Master Plan document. Also, like much of Boulder County and nearby areas, OSMP lands suffered serious erosion during the 2013 flood. OSMP officials say the department currently has about a $40 million maintenance backlog, although when or whether projects will be completed depends on available funding and prioritization.

The history of Long’s Gardens at its current location stretches back to 1916, when the property was purchased. Today, its 25 acres serve Long’s Gardens, as well as nonprofits Growing Gardens and Mountain Flower Goat Dairy. The property sits along north Broadway, about a mile north of downtown but south of the growing North Broadway area. A conservation easement would leave Long’s in private hands, but protect it from subdivision or commercial development.

2H PRO:
* OSMP has a substantial maintenance backlog, and 2H would help fund needed maintenance work.
* OSMP is not as likely to attempt to acquire large quantities of land moving into the future since it already manages 46,000 acres and many desired parcels have already been purchased, but 2H revenue could enable purchases should a parcel become available.
* Open Space is a top feature for the City of Boulder, important for residents and visitors alike, so keeping OSMP lands and trails in good condition would help with aesthetics and user experience.
* 2H is an extension of an existing 0.15% tax, so it would not add to peoples’ existing tax burden.
* Both Long’s and OSMP provide green space and relief from development within or near the city boundaries.
* Long’s provides opportunities for Boulder’s youth and general community to experience and learn more about agriculture, at a convenient location within city limits.

2H CON:
* 2H would extend a sales tax that was intended for transportation, so Open Space was not the original intent for this 0.15% sales tax.
* Sales taxes are regressive, and OSMP could/should investigate other types of funding.
* The Long’s property could instead be used for housing.
* There’s always the debate over whether extensions are tax increases, and certain people might say this one is because without 2H, the 0.15% tax would expire on Dec. 31, 2019.

Issue 2I would create a city middle-income housing assistance pilot program, enabling the city to provide housing loans for middle-income households to help them purchase “permanently affordable” deed-restricted homes. If it passes, the city would be authorized to take on up to $10 million in its own debt to make the loans to homebuyers, with maximum repayment cost of $15 million (TABOR requires ballot measures involving debt to include a maximum repayment cost, but the actual cost could potentially be lower).

The program would be aimed at “middle-income” households at 120% of Area Median Income (AMI) or less, and 120% AMI equates to a household of three earning $117,360 in 2018, according to a Feb. 19, 2019 city memo. The city’s Middle Income Housing Strategy working group released a report in 2016, including a goal of creating or obtaining 3,500 middle-income housing units by 2030 – 2,500 market-rate and 1,000 deed-restricted permanently affordable. Passing 2I would provide one tool for the city to work toward the middle-income permanently affordable goal.

In brief, the new program would allow the city to issue a second mortgage on a property, worth equal to the difference between a household’s down payment plus the amount of money a lender is willing to loan the purchaser, and the home’s purchase price. For example in round numbers, if a household is looking at a $500,000 home, and can put down a $50,000 down payment, and a bank will provide a home loan of $350,000, then the city program would provide a second mortgage of $100,000. Home buyers would not need to make payments on this city down payment assistance for 10 years, but would need to pay the city loan back with interest – either when they sell the home, or at the 10-year mark. This potentially could require refinancing or other financing mechanisms.

The home’s appreciation would be limited by a given percentage per year – according to a Sept. 3 city memo, Council had said two percent would be an appropriate starting point. In essence, home buyers able to make at least a five percent down payment would make payments on a first mortgage of significantly less than the home’s purchase price for 10 years (unless they sell), since the city would be providing the second mortgage without requiring payments for 10 years.

2I PRO:
* The price of housing in Boulder continues to increase. While the city has programs for low-income households and wealthier households might not need to worry as much about affordability, housing is increasingly difficult for middle-income households.
* The financing structure set up under 2I could help keep homeowner mortgage payments manageable, possibly allowing households to live with more “disposable” income while still buying a home.
* Deed restrictions on properties not only help current owners with affordability, they also keep properties more affordable for the next buyer, in turn leaving more affordable properties in the city’s overall housing stock.
* Keeping middle-income earners in Boulder, as opposed to living in neighboring communities, could allow people working in Boulder to better experience the community, and could reduce travel along with greenhouse gas emissions from commuting.

2I CON:
* Owners of deed-restricted property sacrifice some level of value appreciation, which means depending on market forces they could be sacrificing household value relative to families owning market rate units.
* The limited appreciation on a deed-restricted unit might limit households’ ability to purchase a market rate unit should they choose to sell the deed-restricted unit.
* Households purchasing with a 2I loan still might not be able to afford payments in the long run, especially if a household’s economic condition changes, and there’s no telling what might happen with interest rates into the future in case refinancing is necessary.
* Depending on the progress and popularity of the 2I program, the city might at some point exhaust its $10 million initial debt, leaving it unable to offer down payment assistance to second-round buyers or other households able and willing to participate. 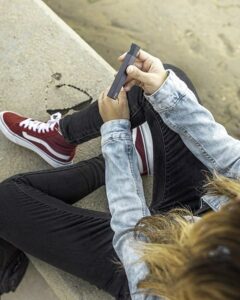 You don’t have to be young to vape, but many people are concerned about the consequences of starting young. (Photo by Sarah Johnson, Irvine, CA)

Issue 2G would place a sales and use tax of up to 40% on sales of all electronic smoking products in Boulder, including cartridges, refills, and other components. The revenue would be used for city health and education programs regarding nicotine use and cessation, enforcement, and administration. If the city does not use all revenue on the programs listed above, under 2G excess money would go to the city’s general fund for general city services.

2G PRO:
* Vaping is currently prominently in the news for contributing to serious lung disorders or even fatalities (though some of the problems might depend on the type of product or quality control issues), and making products more expensive under 2G could help reduce demand.
* Certain vaping products, especially flavored products, may appeal to youth, and one of the best ways to reduce overall use of addictive products is to discourage young people from using in the first place.
* In the grand scheme of things, vaping is relatively new, and its overall health impacts including the effects of prolonged use are not completely understood, so reducing demand could prevent some longer-term problems.
* Revenue from 2G would fund health-related programs.

2G CON:
* Reducing vaping through high taxation would more than likely impact vaping businesses and their employees.
* The 2G tax is regressive, in theory affecting lower-income vapers should they choose to continue vaping more than higher-income vapers.
* The classic libertarian argument – government should have no business in social engineering efforts like attempting to reduce vaping, when adults can make their own decisions.