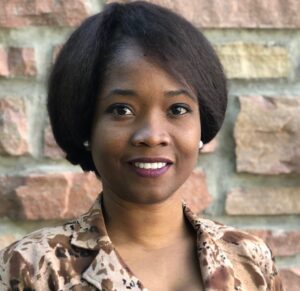 Junie Joseph, a candidate for Boulder City Council in 2019, started this early morning interview at a coffeeshop by listing a big mug full of reasons she’d like to win a seat – she’s service-oriented, plus in short she believes there are issues with affordable housing, homelessness, socioeconomic inequity, and student representation at the city level.

“I see Boulder as a vibrant community, but I see that there’s a lot of work that we can do. We can do better, and I think as someone who has worked in the human rights field I have this perspective that I can offer,” said Joseph as part of her answer as to why she’s running.

Joseph was born in Port-au-Prince, the capitol city of Haiti, and moved to the United States at “14 or 15” years old. She did not speak any English upon arriving in the U.S., and said she had to deal with a lot – including learning English and going to school without knowing the language, and living among a more diverse culture than the relatively “homogeneous” culture she was used to in Haiti. She also moved from a relatively poor country financially to a wealthy country, which helped her better understand socioeconomic disparity. She graduated from Winter Park High School in Winter Park, Florida.

She attended community college before enrolling at the University of Florida, where she earned undergraduate degrees in political science and anthropology, and then earned her master’s degree from the University of York in York, England. Today, she’s a law student at the University of Colorado. She said with “working class parents,” her path through higher education has not been easy, and she paid for “a lot” of her education herself, but believes that she has accomplished things that might have been outside the reach of her socioeconomic class.

After college, she went on to hold a wide variety of positions relating to human rights. The short version includes: work in South Africa with the indigenous Khoe-San; research in Haiti, work with the United Nations’ Office of the High Commissioner for Human Rights in Geneva, interning in Washington DC with the Council on Native Americans Affairs in the Obama administration, and once again with the UN in the Central African Republic helping to protect the rights of women and children.

As of this mid-September interview, Joseph had lived in Boulder for about a year. She said during this interview and in many forums or other interviews in 2019 that it was difficult for her to find housing here, and she had to live in Louisville for a time before finally finding an apartment within city limits.

Alpine-Balsam-Broadway: In mid-September, Joseph said the Alpine-Balsam project presents the city with an opportunity to create more affordable housing, including for people such as teachers, firefighters and police officers. She told the story of meeting a teacher who lived in a mobile home because she made too much money to qualify for permanently affordable housing but not enough to afford a market-rate unit, and Joseph said Alpine-Balsam might help people like this teacher while also helping the city move closer to its affordable housing goals. She said Alpine-Balsam has an ideal location along Broadway which would allow residents to access transit, enable people to possibly live closer to where they work, and provide walkable access to retail and other amenities.

Growth, Density, Jobs-Housing Balance: Joseph said she has heard that some people prefer Boulder just the way it is, but to her the key issue is “not about growth, it’s about people who want to live here in Boulder.” As with her answers to several other questions, she spoke of how lack of affordable housing in the city forces people to live in neighboring communities and commute into town. She supports creating more transit-oriented development in Boulder, which to her can positively impact diversity, inclusion, and climate change. Joseph said the city is fortunate to have a strong economy, and said there should be partnerships between the city and employers, who could potentially improve the jobs-housing imbalance by helping to ensure that more people who want to live here can attain housing.

Climate: Joseph started to answer this question by emphasizing that issues are not isolated, but interrelated. She believes that creating more affordable housing will have a positive climate impact, in part because Boulder is said to have some 60,000 in-commuters coming in and out of Boulder on work days, and giving some of the in-commuters an opportunity to live closer to work would could cut down on vehicle travel. She also believes the city’s transportation system could be better, and noted that she had lived in Geneva (Switzerland) and visited Germany, and said these experiences have shown her “how transportation is done.” Joseph said she has used RTD services, including the Flatiron Flyer lines, but believes transit services could be accessible in more areas within the city, and thinks the city needs to improve options for first-last mile transportation, including cycling and pedestrian facilities.

Boulder Municipal Electric Utility: Joseph spoke positively about how the muni would involve participation of the people in the community, and said “as long as the people of Boulder want municipalization I am in favor of it.” She said she is aware that Xcel Energy is stepping up its goals regarding renewable energy, but said Xcel (which is an investor-owned corporate utility) does not require as much public participation when they envision changes that might impact Boulder as the muni would enable. She said the muni could allow for localized developments such as creating microgrids, and for community input around key issues such as rate changes.

Social Equity: Joseph said Boulder has problems with social equity, including socioeconomic inequity and political inclusion. She said the cost of housing and lack of affordable housing factors into socioeconomic inequity, and for example said a person making the state minimum wage of $12 per hour can’t afford to live here, or if they do choose to live here they’re “spending all of their money on rent.” According to Joseph, “affordable housing is a huge part of it because we can’t live in a community where we only have one class of people, which is just the wealthy.”

CU-South: Like most candidates, Joseph said the health and safety of residents living downstream from CU-South must be the top priority, and said we need to “go about this as quickly as we can.” She also mentioned the challenges of protecting federally endangered species such as the Preble’s jumping mouse as part of the flood mitigation planning process. She emphasized the need for both the city and CU to “get on board” and work toward a collaborative solution, since climate change may contribute to serious future storms that may impact the area, and she said it would be hard to look a family member in the eye and say something bad happened in a flood event “because we decided that something else is a better priority than human life.”

Right Decision at Hogan-Pancost: Joseph did not choose to give a “yes/no” answer on this question. She said the decision was made in the past and she was learning more about the issue.

More City Resources for Homelessness: Joseph gave a relatively long answer that did not include a definitive “yes/no,” but she emphasized that budgets should be about prioritization and the future should not be about just “throwing money.” She did say “yes” to that the city could do better for the homeless. She said she has practiced “results-based budgeting” in past work, and would want data analysis – including disaggregation of aggregate numbers – to guide her decisions. She volunteers at the Boulder Shelter, and as part of her answer spoke positively about recent local projects including Housing First and Attention Homes.