Orba: She Had Some Choice and Settled Here 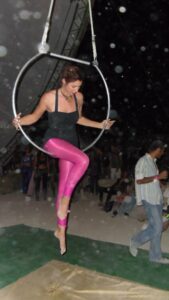 Gala Orba, a candidate for Boulder City Council in 2019, has taken a bit of a long and winding road to get here, but she credits Boulder as being the town where she grew into adulthood and became “who I am as a woman,” and is hoping to earn a seat on Council so she can give back to the community.

“I notice on the campaign trail that a lot of people are upset because they think something is one way but they don’t have the bigger picture. As somebody who’s very good at seeing the bigger picture and being able to birds-eye view things, I feel like this is what I’ve been preparing for my whole life,” said Orba on part of her motivation for running.

She grew up on the north side of Chicago, just a few blocks from Wrigley Field, and remembered she used to sell lemonade to Cubs fans as they walked by on Addison Street. Her mother is English, and she took Orba to school on the Isle of Wight for fifth and sixth grades. Her parents divorced a few years later, and she enrolled in a college preparatory high school that she said was “harder than college,” but it gave her stability at a difficult time in her life.

Orba started college at Fordham University, in Fordham Lincoln Center in Manhattan, and her two years at Fordham coincided with the attack on 9/11, “which was pretty dramatic, as you can imagine.” She studied abroad in African dance at the University of Cape Town in South Africa, and then came back to Chicago and earned her degree in actuarial science from DePaul University, although there were more plot twists. Before graduating she traveled in India, Thailand, and Cambodia, and finished her final credits at the University of Illinois in Urbana, a college town that’s smaller than Boulder.

She visited Boulder for the first time about 10 years ago, and like many people, fell in love with the town and decided to move here. She found a room for $350/month in what she called a “communal house,” got a job at The Kitchen, participated in the aerial dance community, and eventually got a teaching license from CU-Boulder. She went on to teach at Boulder High School, Watershed School, Casey Middle School, and Temple Grandin School. She started a life coaching program in 2018, which she still does today, and said as a self-described “rainbow personality” she enjoys doing multiple things for work, and hopes in 2019 that means she’ll be life coaching and serving on Boulder City Council.

Alpine-Balsam-Broadway: Orba supports “mid-density” development at Alpine-Balsam, with an adequate amount of affordable housing stock, and as of late September supported having city offices on site, in part because certain existing offices suffered damage during the 2013 flood and could use new homes. She lived near 9th Street and Alpine for a number of years, and believes new development should blend in with the existing neighborhood as much as possible. She was aware of discussions around on-site parking minimums, and said she did not support setting parking availability too low since she believes new residents are likely to have cars, and scrimping on parking at Alpine-Balsam will force parking into other neighborhoods. “I do want to encourage them to take the SKIP, they’re right on Broadway, but you can’t force people to take the bus,” said Orba. She would support transit incentives, including Neighborhood Eco Passes for residents. She is a dancer and supporter of the arts, and would like to see an on-site public arts space.

Growth, Density, Jobs-Housing Balance: Orba said she doesn’t believe the Council can be the sole deciding factor when it comes to growth, since there are market forces influencing demand. She said there are real problems with affordability in town, and favors the city pursuing additional projects like Tantra Lake Apartments, in which Boulder Housing Partners purchased the complex to establish a mixed-income community. She believes the city could do a better job publicizing the availability of affordable housing in town, which she said could be beneficial for people of color. Orba favors rent control and hopes the state legislature can tackle this issue to make it legal in Colorado, but noted that she met a local landlord who did not want to reduce rental rates because it was income for retirement and the landlord “also has to afford living in Boulder.” Also, Orba is in favor of requiring city employees to live in town, though she said this would take some time to implement, but done successfully would have an impact on congestion and local traffic patterns.

Climate: Orba said she supports incentives for people to buy electric vehicles or hybrids, and would like to see the phase-out of fossil-fueled vehicles. She wants the city and people in the city to install as much solar generation as possible, speaking positively about requiring larger homes to have a renewable energy source, and supports city subsidies to help individuals purchase solar panels. She believes the city does a good job working toward making sure the city is bikeable and walkable, and while she doesn’t believe city residents will stop driving for the foreseeable future, she hopes the transition to electric vehicles will help mitigate impacts on the environment. While this isn’t necessarily about climate, she used this question to emphasize her concern about pesticides and GMOs in Boulder and surrounding areas.

Boulder Municipal Electric Utility: Orba is in favor of moving toward creating a municipal utility, but does not believe the process has been optimal to date and wants a “pause” to regroup and rethink. She would like the city to obtain the services of a condemnation attorney, and believes the city should set significant money aside in preparation for the cost of condemnation. She said she’s “appalled” at how much the city is “wasting” on legal fees. Orba says she is very much in favor of a locally-operated utility as opposed to the current investor-owned corporate utility, and is confident the muni can work in Boulder because there are munis located elsewhere in Colorado and the nation, but believes Boulder needs to expand its network for input and advice.

Social Equity: Orba said the city certainly has a diversity problem, which in part is linked to the affordable housing issue, and so she would support affordable housing action to help address some of the lack of diversity. After growing up in Chicago, she said she is used to vastly more diversity than Boulder’s level. She spoke positively about the recent “Rainbows Over Pearl” effort in which businesses flew rainbow flags and city crosswalks were painted in a show of support for the LGBTQ community, and said welcoming gestures like this go a long way. Orba also said availability of employment and entrepreneurial opportunities for people of color could help them with affordability issues, and said she has seen mentorships and partnerships make a difference in peoples’ employment or career paths.

CU-South: Like most candidates, Orba said the health and safety of residents living downstream from the CU-South property had to be the top priority, which means flood mitigation is a top concern. If/when the site is developed, she would favor having housing for CU sophomores at CU-South. This interview took place not much more than a week after city staff pulled the Variant 2 mitigation option from consideration due to CDOT concerns about construction in its US 36 right of way, and Orba observed that CU-South negotiation seems to be proceeding as a “process of elimination.” In a candidate forum several weeks before this interview, Orba spoke favorably of CU and the benefits of living in a college town, and said she supported moving forward with annexation of CU-South. In late September, she still supported annexation, and said while chances are that a negotiated compromise probably won’t make all parties happy, it’s important to find a solution because “that’s what leaders do.”

More City Resources for Homelessness: Yes, she had positive things to say about Attention Homes and how the project helped people obtain shelter, and favors additional resources to provide amenities for people experiencing homelessness such as porta potties, “sharps” needle disposal units, lockers, and separate women’s shelter facilities since women may feel unsafe in shelters with men “for good reason.”

Key Donations: As of Oct. 22, Orba had not received donations from current or former Council members, and had largely but not completely self-funded her campaign to date.