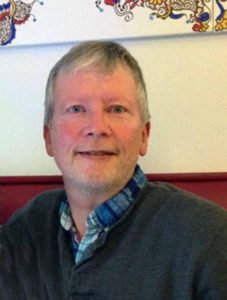 Richard Valenty (that’s me!) was born in rural Minnesota – not to great financial wealth, but wealthy beyond belief in family life, with grandparents, uncles and aunts living nearby; devoted parents; and loving siblings with nieces and nephews who remain the greatest of friends to this day.

Without too much bragging, I might have been born and/or raised to be a man of letters. My mother read to me as soon as possible and I’m pretty sure I took great interest. I’ve been told that I read at a very early age, and I developed a fascination with dinosaurs that led to drawings of dino skeletons with perfectly-spelled long scientific names underneath. A family friend worked for the local newspaper, and he would bring us pieces of blank newsprint, which I used to create my own newspaper called “The Daily Blab,” complete with headlines, sports, and weather maps. I won the school’s spelling contest every year I was in elementary school. 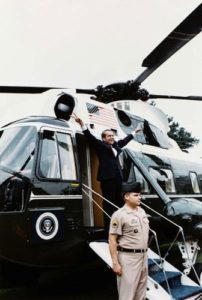 In 1974, I like many other Americans watched the unfolding drama around Watergate, which led to the resignation of President Richard M. Nixon and a dark period of mistrust of government. It sparked my interest in the world of politics, one that has lasted throughout my life, and I wrote a paper in middle school suggesting that Democrats should have made a bigger deal out of Watergate before the 1972 election, since there was knowledge about the break-ins. My grandfather ran for the state House in the mid-70s, and I helped drop literature for the first time in my life. He didn’t win the House race, but did serve on the local town council. I enjoyed talking politics with him when possible, including when he told me Reaganomics would expand the national debt – a lesson that’s stuck with me through the “tax cuts will pay for themselves” predictable failures of Bush II, Kansas, and now Donald Trump.

I went to college at Bemidji State University in northern Minnesota. Up there, they used to call people from Minneapolis “sissies” because it was so much colder up north. Cars left outside in the depths of winter would not start, and exposed skin would start to hurt. But thankfully, classes were held inside, and I loved my studies. I graduated with a major in Social Studies/secondary education, with a prior major in History, a minor in English, and a coaching certificate. My period of student teaching enhanced my public speaking abilities, and I earned a college letter in Cross Country running.

But after living in Minnesota for 21 years, the wanderlust was powerful. After a brief visit, I moved to Colorado with several college friends, and found work at Copper Mountain Resort along with other places in Summit County. I used this new perch to explore much of Colorado, with visits to other nearby Western states and near-yearly trips to Canyonlands in Utah. The recreation was fantastic, including downhill and cross-country skiing, climbing, mountain biking, hiking, whitewater rafting, fishing, camping, night sky viewing, and more. I learned how to cook and worked in some very good resort-area restaurants, most notably “The Navigator” seafood restaurant at Keystone. A friend of mine from the Navigator talked me into a glorious trip to Alaska that included travel through three Canadian provinces, and as it stands today, I’ve been in every state west of the Mississippi except Hawaii – also four Canadian provinces, Great Britain, France, Monaco, and Spanish Catalonia.

Living at high altitude (about 9,000 feet) is not always easy, and I marched carrying a horn in the local 4th of July parade just before a storm that dropped 6” of snow during what for all practical purposes should have been “summer.” I decided to move to Boulder, in part to chase a musical dream, but also to live in this hyper-educated community with a non-seasonal economy. My first job was with RadioShack, and I managed a RS outlet before taking a job in the electrical department at McGuckin Hardware. Perhaps this period of time was not spent in my true calling, but I learned basic electronics, 1990s-era computers (yes, I sold computers with 386 processors), home wiring, and the existence of thousands of useful parts and tools. It’s good to have a clue about how things go together, which helps one know how to fix or make things, but also (usually) when one needs to call a professional!

The writing bug was never far away. I did an internship with the Summit Sentinel newspaper while in the high country, which led to an opportunity to write for Where Magazine in Denver. This got me some nice clips, glossy magazine covers, and the chance to write about Red Rocks, Denver professional sports, and beer. I sent one of them to the sports editor of the Colorado Daily, who was looking for a person to cover CU cross country, and he called this former college cross country runner and said “Let’s talk!” I wrote for the Daily part-time from 2000-03, covering several meets at which CU won the NCAA championship, and meeting about two handfuls worth of Olympic athletes. I regard CU’s head coach Mark Wetmore as a great influence on me, since someone finally got me to understand the values of devotion and precision, and the man has had an amazing career as a coach. 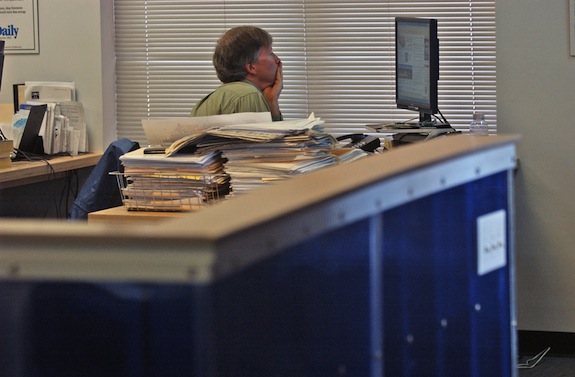 Large stacks of city agenda packets on my mind!

Sports got old, and I asked my editor if I could get into harder news. I was hired to work the City beat, and covered local politics for the Daily from about 2003-08. During this time, I interviewed countless candidates and officials from nearly all levels of government. Local government issues can actually be crazy geeky, and I spent a lot of time poring through gigantic PDFs and planning documents. 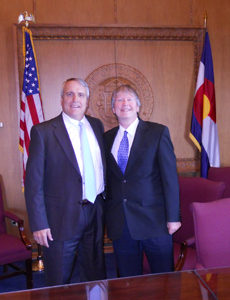 I interviewed former Gov. Bill Ritter before he was the party’s nominee, and met him in the Governor’s office when I started working at the Capitol

I also covered presidential events featuring Obama, Bush II, and John Kerry; the most recent arrest in the JonBenet Ramsey murder case; CU award-winning scientists, controversies, and developments; State of Colorado bills and issues; crime and courts; economics and environmentalism; and I edited our yearly Election Guides. It was a tremendous experience, and I’ll guess that to date I’ve been published more than 2,500 times, but my Daily times were not meant to last.

In recent years, the newspaper industry has encountered tough times, largely due to the loss of advertising revenue to online sources. The path to survival in many cases has been through conglomeration, and the Camera took over the Daily with plans to eliminate positions – and today, a large corporation with a hedge fund owns the Camera along with many news outlets in Colorado. I saw the writing on the wall and left the Daily before I was laid off, which was not what I wanted to do, but sometimes the lack of choice creates clarity. And as it seems to happen, one door closed and another opened. 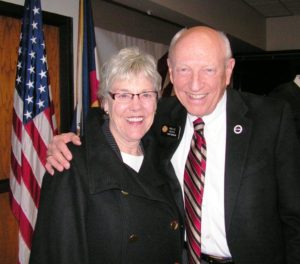 Rollie and Josie Heath – friends, mentors, and pillars of our community who always led by example

I saw former State Senator Rollie Heath at his primary election night victory party in 2008, and a friend of mine said he would be looking for staff. I somewhat shamelessly pursued him, but he respected my writing with the Daily and put me to work. I worked for Sen. Heath and the Senate Democrats for the next eight years. It was a real thrill to work at the Capitol and to see the lawmaking process first-hand. We started work in late 2008, during the Great Recession, which led to high rates of unemployment and state budget cuts.

In 2010, I worked with Sen. Heath and others on a local effort to defeat the “bad three,” (AKA 60, 61, and 101), proposals with a linkage to TABOR author and anti-tax crusader Douglas Bruce that would have slashed public revenue just when we didn’t need additional slashing. I built the local campaign’s website, spoke at local forums and on KGNU radio, and prepared literature – and locals voted against the measures with 75-80% opposition. In 2011, Sen. Heath asked me to co-sponsor an initiative to increase funding for education, and while voters defeated Proposition 103, we spread the word about the value of education and I got to work on a statewide campaign. With the Senate Dems, I worked as an outreach specialist, Executive Assistant to the Majority Leader (Sen. Heath), and Deputy Communications Director, and used my small amounts of spare time to walk doors, phone bank, and canvass with a number of campaigns outside of Boulder. 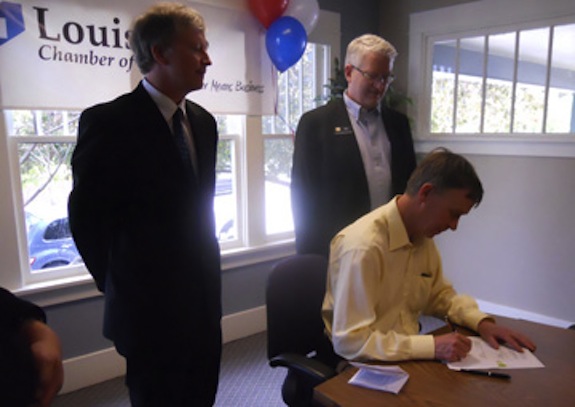 Filling in for Sen. Heath at a bill-signing in Louisville, with Gov. Hickenlooper signing and then-Rep. Matt Jones at right

Sen. Heath was term-limited in 2016, and my time in Denver ended in July of that year. However, I had worked on several projects at the Capitol with former Sen. Gail Schwartz from Pitkin County, and she decided to run for Congress in the 3rd Congressional District. She hired me as communications director, which was incredibly educational as we were immersed in hot-button federal issues, such as the future of our public lands, military spending, water issues, economic troubles in rural areas, energy and environment, the so-called “obstructionist Congress,” and the disturbing comments during the 2016 presidential campaign from Donald Trump. The campaign was unfortunately unsuccessful, but I will always regard it as an important life experience.

In 2017, I worked several freelance jobs, including work for Boulder County, small writing and web design projects, and a chance to write extended City Council candidate profiles for the Boulder Blue Line website. Moving into 2018, I did communications work for Colorado Rep. Edie Hooton, managed Lynn Guissinger’s successful campaign for the RTD Board of Directors, worked on regional efforts to publicize the Colorado transportation initiative Proposition 110, wrote about City of Boulder ballot issues for the Blue Line, and wrote water conservation stories for Resource Central. I’ve also served as a precinct captain for the Boulder County Democratic Party since 2012, and took part in the 2018 ground game that helped Dems enjoy tremendous statewide results.

In a nutshell, I’ve covered or worked on issues at basically all levels of American government – HOAs, neighborhood associations, special districts, city, county, state, and federal. I’ve also spent a majority of my working life in the private sector, which has given me valuable perspective for work with for-profit or nonprofit businesses. If you’re interested in a hard worker with deep experience, let’s talk!

RICHARD VALENTY: AT A GLANCE