Without exaggeration, I regard music as a sacrament, though anyone who’s ever played with me knows I have a warped and twisted sense of humor about it as well. Done right, it can elicit some of the greatest emotions known to man – ecstasy, melancholy, true love, and delusional infatuation among them – and I have always found ways to get music into my life whenever possible. 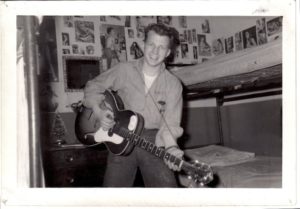 My father with his guitar, In The Navy…

I grew up surrounded by music. My parents had a record player, and I remember listening to albums from Johnny Cash, Peter Paul and Mary, and movie soundtracks like “Camelot” and “The Russians are Coming.” Some things will never change. I’m guessing that the first music I played came while sitting on my parents’ bed, grabbing my dad’s guitar, and hitting a string then cranking the tuning knobs to change the pitch. I’m sure my dad was pleased! The Beatles took over America while I was a kid, but I didn’t like them at first because a neighborhood bully wore a Beatle wig. This would change.

One of my sets of grandparents lived just a short walk away, and when I started piano lessons in around 1967, I could just stroll over and practice. They had a grand piano and a metronome, a great selection of recorded music, and for bonus points I would usually get tasty treats whenever I would visit. Piano is a great starter instrument, since done properly one musician can express melody, harmony, chord structure, bass patterns, dynamics, and rhythm without any accompaniment. I developed knowledge of the classical masters and good practice habits, and loved performing at piano recitals though it did get the nerves jangling a bit!

I joined the middle-school band in 1972, playing the trumpet, but my director told me my lips were too big for trumpet. I switched (or was switched) to the baritone horn, a brass instrument shaped like a miniature tuba, and the larger mouthpiece really was a better fit for me than the trumpet. I played the baritone until graduating from high school, grudgingly playing in the marching band, but really enjoying the intricate classical music in concert band and being surrounded by all the unique instruments that make up a quality orchestra. 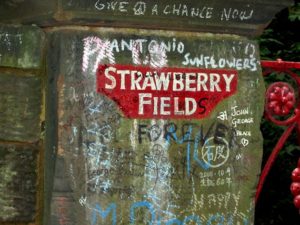 Strawberry Fields Forever – what a work of art! Photo by Eirik Newth

To this day, I feel lucky to have grown up during what I believe to be the Golden Age of popular music. I remember walking down a street in my hometown, and some crazy-innovative song was playing on the radio, with an out-of-this-world musical structure, complete with string and horn patterns. This was Strawberry Fields Forever, and I really can’t say I knew it was The Beatles – but I was hooked. Some music from the 60s and 70s sounds dated today, but the best of The Beatles, Rolling Stones, The Who, Pink Floyd, Led Zeppelin, Joni Mitchell, Jimi Hendrix, Grateful Dead, Santana, CSNY and its various iterations, Heart, The Kinks, The Doors, Aretha Franklin, Dylan and others still sounds great to me. 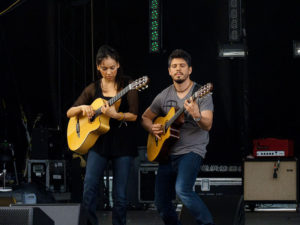 However, I’m not stuck in the Golden Age, and I very much enjoy artists from both before and after the 60s and 70s, obscure or popular. I could listen to good Colorado bluegrass bands all day, without even knowing who they are – though “Hit and Run” with Rebecca Hoggan was totally awesome. Public TV has exposed me to folks I might never hear otherwise, such as Esperanza Spalding, Angelique Kidjo, Corinne Bailey Rae, or Abigail Washburn. Pop music since the 70s has included great acts – REM, U2, Red Hot Chili Peppers, Norah Jones, Radiohead, Rodrigo y Gabriela, Metallica, and too many others to mention.

I joined my first rock band in about 1973, as the keyboardist for the legendary “Freedom,” possibly named after Bread’s hardest-rocking song “Mother Freedom.” My involvement didn’t last long, but I remember our tape recorder being closest to my keyboard when we recorded “The House of the Rising Sun,” and felt like a low-level rock star when the tape played during middle school. To the best of my knowledge, at least two members of Freedom are still playing.

While living in Summit County, I attended a gig at the old Breckenridge haunt Shamus O’Toole’s, and the singer/rhythm guitarist told me their lead guitarist was quitting the band. I worked at the time with the drummer, whose style indicated to me that he listened to Keith Moon and The Who. I auditioned and joined the band Elvis Mows the Lawn, and between late 1989 and our breakup in 1993, we really improved from a garage band playing for friends to a decent group that could entertain strangers for crowds up to a few hundred people. We changed personnel and invested in equipment, I practiced to the point of having extremely calloused fingers, I wrote a few original songs that we performed, and we generally had a blast. 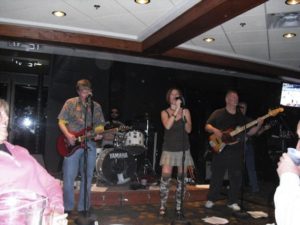 I moved to Boulder in hopes of taking my music a bit farther, but quickly found that Boulder needed another guitarist like Summit County needed another ski bum. I did perform a few small gigs, and played a bunch of open mic nights that featured some really good musicians. The bass player from Elvis Mows the Lawn called me one day a few years later and said he needed a guitarist for a Summit County band, so I joined a band that had a bunch of names, probably settling on “Eclipse,” and we played ski area gigs for reasonably good money. Next, I played in the Boulder band “Low Down Lenny” with the singer and keyboardist from Elvis Mows the Lawn, and we played a handful of Front Range gigs before the world’s least publicized breakup. 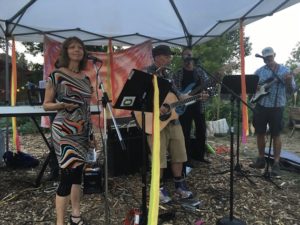 The Howling Commandos playing on a stage of mulch!

Today, I still love music but don’t have any desire to stay in a nightclub until 2:00 a.m., tear down equipment, get the equipment home, pack the equipment in, and get to bed by 4:30 – potentially waking up at noon the next day with fatigue or a hangover. What a drag it is getting old! I enjoy playing guitar and harmonica for kicks with the band “Howling Commandos,” and I’ve done 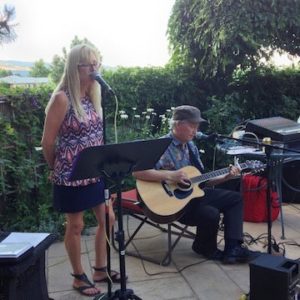 Tracy Reichenbach and yours truly, as sensitive singer-songwriters

some recent acoustic duos with the old singer from…Elvis Mows the Lawn. Don’t hold your breath, but I’m working on learning how to record on Garageband, and plan to self-produce some ideas I’ve got kicking around in my head. Whether any of it comes to fruition or not, you can safely assume I’ll have some connection to music until I truly experience The Great Gig in the Sky!